A Wedding on the Riviera has been out just over a week, and I've been doing the rounds of fellow authors' blogs, with more to come. We've talked about the book, research, my academic interest in the Second World War, locations, writing tropes and mixing love with crime. There are links in last week's post and I'll post more next week.

In the meantime, how is the book doing? Well it has been in the top five Hot New Releases for French travel on UK Amazon for a few days now. It's at #2 at the moment - will it make #1? Fingers crossed. It's also gathered over 20 UK reviews already - and 7 in the US - and I have to say I have been slightly stunned by the strength of the response. It's nearly two years since I had a book out, and I really didn't know what to expect. If you were one of these reviewers, thank you. I'm sure someone will eventually prick my bubble, as you can't please everyone, but at the moment it is awesome and humbling. But it is why I write the books - I want to give people some fun, excitement and escape, and at the moment that's especially welcome - at least it is for me. I'm not writing great literature, although I do hope that the books are well written. To know that people are enjoying what I have produced is my reason for doing it.

One thing I have noticed, from the reviews and various other comments - readers are already asking when the next one is coming out! Well I have had to do all those blogs and promotion and I'm part way through cleaning the house, which is the first thing to go when I have edits, and I've also been taking a secateurs to the jungle outside the window, but I have located the Work in Progress, under a pile of magazines, and started to read it, so we have some progress. I'm hoping to get to it this afternoon too, so we shall see. But writing does take time, and I want it it be the best I can make it. So please, you have to give me a chance.

When my mother was in hospital for the last time, I managed to get hold of a brand new release from 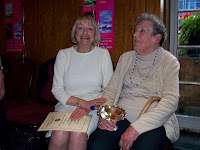 her favourite author. It was the first of a trilogy. She really enjoyed it and when she handed it over to be returned to the library she asked me rather  wistfully how soon I thought the next one would be out. She knew the score, having a writer in the house. 'I know it takes you authors longer to write them than it does for us to read them, but I hope it's soon.'  It was the last book she read.

She and my grandmother were great readers and probably one of the reasons I am a writer. So I will be working on the next one as soon as I can. Promise.