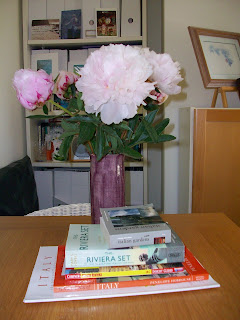 A Villa in Portofino is a long book. The first draft was even longer. I hacked out 5,000 words before it ever went near the publisher. A lot of those words could quite easily be cut - making the thing a lot sleeker, but there were a couple of places where I decide to take out descriptive paragraphs that might have added to the texture of the book, if not the advancement of the story. I kept three of those, thinking it would be interesting to share them in a blog post, so here they are. Not quite spoilers - but you will probably enjoy them more if you have already read the book.

The Library at the villa. Most readers and writers I know have library envy.  I mean - a whole room, just full of books. One of the fun things about being a writer is living vicariously, so if I was creating the home of her dreams for my heroine I gave her a library. And a lot of books, inherited from her great- great aunt. I did a bit of research into the type of books that Aunt Olwen might have collected - best sellers over the years, dating from from the 1970s, when the villa was built. They were also a little insight into the kind of woman Olwen was - the kind of woman who would follow a man she barely knew into the unknown in the name of love.

She’d found some interesting examples of the Aunt’s taste in fiction over the years, Sophie’s Choice, Love Story, The Bridges of Madison County, Scruples. She picked up a copy of Shirley Conran’s Lace, leafing through it. There’d been a copy on her Grandmother’s bookshelf, she remembered. Her Grandmother hadn’t had a copy of the Hite Report though, or a dog-eared paperback of Dr Alex Comfort’s Joy of Sex.

Megan pushed a lock of hair out of her face, wishing again that she might have known her Great-Aunt. She checked the date on the Comfort volume, 1972. Olwen would have been in her mid-forties then, but she and Uncle Eduardo must have still shared a passion. It was good to know that their love story had worked out, together with a tiny insight into the woman who had lived in the house and made the garden. Was it her spirit she could sometimes sense?

The second set of extracts is a bit of a spoiler - it's from a description of the audience after Megan does her talk at the Institute.  I wanted to include her old tutor - a distinguished scholar from Oxford - to increase her prestige. In the event I decided he was a personal appearance too many and he got relegated to a character mentioned but not seen. There is also a reference to Gideon chatting with an architect - that line got taken out, but I re-instated the idea of the conversation in the revised draft.

Dottore Marchiano was looking a little anxious, but Gideon was at ease watching the crowd. A tall man with a leonine head of grey hair and a good but old-fashioned suit was kissing her cheeks and drawing forward two young men. Megan’s delighted expression suggested this was an old friend. Her university supervisor maybe?

AND - (the group is moving towards the reception in the garden.)

To Gideon’s inner amusement Megan made something of a royal progress towards it, with himself, the Director and the two students as courtiers and acolytes. The leonine man was Megan’s old supervisor, breaking a journey from Oxford to Florence especially to hear the talk and introduce the graduate students.

Having listened to the lecture several times, Gideon found he could follow some of it when she drew him into the discussion about the possibility of the tower at the villa being the tower of the poem, then he found himself in conversation with an architect who had an interest in old structures and wanted to know about the old part of the building.

The last extract is pure self indulgence. Whenever any of my characters visit Nice readers get treated to a description of the Cours Saleya market, because it's one of the distinctive memories that I have of my visits to the city. This is the visit Megan made. She did a lot of shopping and brought home some of these goodies, but that got lost on the cutting room floor as well.

Megan wandered first through the Cours Saleya market, admiring the displays of fruit and vegetables and flowers. She passed a stall entirely given over to olives of every kind, glistening in the morning sun, and another with a display of cheeses and preserves, and made up her mind to come early the next day to buy produce to take back to the villa. In a few weeks, when the summer season began in earnest, Nice would be flooded with land bound tourists and visitors from the large cruise ships. Now the market was busy, but not too overcrowded. With a last look at the colourful stalls, Megan headed out of the market.

There you are - some of the bits you didn't get to see. I hope you enjoyed them