Maybe it's starting to feel a bit like Christmas - talking to Kirsty Ferry about her festive book.

As everyone knows, I'm always reluctant to give up summer and sunshine, but the Christmas books on offer from my publisher, Choc-lit, are definitely something to enjoy. Today Kirsty Ferry is joining me to chat about her 2020 festive book, Holly's Christmas Secret. 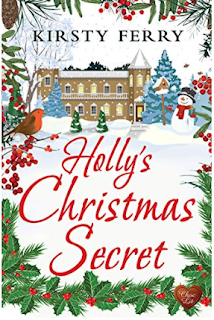 Welcome Kirsty. I've got some questions which I hope will disclose a few of the behind the scenes moments from writing Holly's story - and Sorcha's story too.
Choc-lit has quite a tradition of Xmas releases and you have written several - what attracts you to the idea of writing a Christmas story?

I quite like the idea of a nice cheerful read you can pick up and relax with in between some busy and stressful moments. I do it myself, and I don’t really want to concentrate too hard on my reading at that time of year – something lighthearted and happy fits the bill. I’ve seen some quite miserable books on sale and I wouldn’t touch them with a bargepole. It’s like reading about Covid - who wants to do that? I want escapism and joy in my books, there’s enough awful stuff in the world as it is. My Pencradoc series has a few darker moments in the first two books (I do love me a bit of ghostly Gothic!) but Holly’s Christmas Secret is not dark at all.

You've chosen to set Holly's Christmas Secret in your fictional Pencradoc Estate - what are the plusses of using a location that is already familiar to the reader? Are there any minuses?

I’ve made it a bit of a tradition that my Christmas books are part of an existing series, as lots of readers ask ‘what happens next’ and love reading about the places they know and already have a relationship with. It does make it a little easier for me too, as I have got to know the place so well, I can literally drop my characters straight into the location with their Christmas hats on, and away they go. I might have a problem with 2021, as the first book in my new series is as yet unwritten so we will have to see how that goes! It’ll be a new experience to try to do a Christmas book with no background, so to speak…

Your signature in writing romance is time slip - so we get two love stories for the price of one - will you tell us a bit about researching and writing about Christmas 1906? And about balancing the connections between the two strands of the book?

I had to pick 1906, as I knew I was leading up to Elsie Pencradoc’s story, who was eight in the last book. The timeline was solely based on Elsie’s age and the fact she’d be a young lady by 1906. I went down the Google rabbit hole of house parties and Edwardian Christmas parties and party games as I knew Elsie would well be up for that sort of thing. I’ve always loved the idea of the Bright Young Things and the big Edwardian social events they attended – sure, we might be a little way off that timeline, as the Bright Young Things were a group of  London aristocrats and socialites in 1920’s London, but to me Elsie fits in to that mould quite nicely – if a little ahead of her time. The rabbit hole also introduced me to the concept of the Dollar Princess, the name given to the American girls who were brought to England to marry titled young men, which was interesting yet rather shocking. I quite like the way the two stories dovetailed together. I’ve learned to write one thread first, then write the other one to interweave it in   - I have certain points where I know the two timelines have to merge (ie when they experience the ‘other’ story) and it’s a case of knowing where to put them, and trying to draw parallels along the way to make it kind of understandable why the modern day characters ‘fall’ into the story of the past.

Will you tell us a little about your hero and heroine - both sets - what made them the right choices for a Christmas book?

I introduced Elsie’s friend Holly as my historical heroine, and picked Sorcha who was a minor character in Lily’s Secret as my contemporary heroine. The readers would already be a little familiar with Sorcha, and her life leant itself very well to what I wanted to do with the book. Holly, being one of Elsie’s Bohemian arty friends, is completely different to the type of Society girl Elsie grew up with, and Holly’s story, to me, was exploring a little bit about a girl who was a wee bit outside her comfort zone but used it as a chance to live out a fairytale for the evening, and meet a likeminded soul in Noel. It was only a small leap of faith to make modern-day Locryn an antiques dealer, because that way he would also have a vested interest in the past – and in Pencradoc, as it turned out. Sorcha and Holly are both pretty much self-assured women who have a clear career goal in life, but maybe just need  a bit of a boost now and then, and obviously Noel and Locryn are the ideal men to fall in love with, and fall hard for, these two girls.

Were there any vital touches that you felt had to be included in the book to make it feel Christmassy - even though it is Cornwall, with a milder climate, will there be snow?

There is snow! I did have to say well it might not lie long, but look, it’s here! I needed it to snow for the very last scene anyway, so I made it lie for a bit! There is festive baking and Christmas trees and descriptions of Christmassy things like writing cards, buying presents, telling ghost stories, and lots of lovely decorations – and mistletoe of course. I like to make my readers feel as if they’ve dropped into a magical, old-fashioned Christmas, when I do a Christmas timeslip – like one of those lovely jigsaws or prints you see depicting them. A writing tutor once told me you have five senses, use them all, so I always try to include scents in there as well. We all know how gorgeous a Christmas cake smells when it’s cooking, or the fresh, earthy scent of a real tree, or even the scent of frost and cold outside. It brings it all to life a bit more, somehow.

You have to be quick on your feet to manage two sets of lovers, but as this is part of a series, there will be other people that the reader recognises - and maybe some who will get their own books in the future? How important is the supporting cast for this story?

As I’ve said, Elsie is going to have her own story – it’s a request many, many readers have sent my way – so I’m happy to say she will star in Pencradoc 4. It’s with Choc Lit now, so hopefully she can shock Society in the summer. And she is truly shocking for a woman of her time – but I can’t help loving her. The contemporary tale will focus on Coren and Sybill, characters who have been in the series since book 1, and again people who readers have asked to hear more about. They’ve never actually got together, despite everyone knowing they are ideal for one another and despite both of them having strong feelings for one another. This story might go some way to explain why it hasn’t happened yet and we explore a few more of their deepest secrets. I also move on Merryn and Kit’s story in a very happy way, which I hope people will like as well.

How do you expect to be spending the holiday? Do you have any special things that you always do, decorations that have been made or handed down, things you like to eat? (I'm always about the food)

I honestly don’t know how I will be spending it. I can tell you what I hope to be doing, but as we all know, things can change so quickly in the current climate. My husband is scheduled to be at work, but hopefully my son will be home from Uni for Christmas, we’ll see our friends on Christmas Eve for our usual church carol service and follow that with Chinese takeaway and Muppet’s Christmas Carol on DVD, then put wine, mince pie and carrot out for Rudolph and Santa  (yes he’s 19 but I still make him do it!). We’re planning to have Christmas lunch with my parents if we can mingle households by then – prawn cocktail, turkey and all the trimmings (including my annual intake of sprouts and the fact my dad and I insist on Yorkshire puddings) and Christmas pudding, of course; and the afternoon will be spent eating chocolate and drinking prosecco in my pjs! I will also be eating my bodyweight in mince pies, and my favourite decorations will come down for the tree – a pom pom Santa and a pom pom owl I made when I was little, and a felt snowman I also made which my gran knitted a scarf and hat for. It still seems a long way off, but it’s not really, is it?!

Once upon a Cornish Christmas ...
It’s almost Christmas at the Pencradoc estate in Cornwall which means that, as usual, tea room owner Sorcha Davies is baking up a festive storm. And this year Sorcha is hoping her mince pies will be going down a treat at ‘The Spirit of Christmas Past’ exhibition being organised at the house by new local antiques dealer, Locryn Dyer.
But as Locryn and Sorcha spend more time together, they begin to uncover a very special story of Christmas past that played out at Pencradoc more than a century before, involving a certain ‘Lady’ Holly Sawyer, a festive dinner party and a magical secret encounter with a handsome author ...

Kirsty Ferry is from the North East of England and lives there with her husband and son. She won the English Heritage/Belsay Hall National Creative Writing competition in 2009 and has had articles and short stories published in various magazines. Her work also appears in several anthologies, incorporating such diverse themes as vampires, crime, angels and more.

Kirsty loves writing ghostly mysteries and interweaving fact and fiction. The research is almost as much fun as writing the book itself, and if she can add a wonderful setting and a dollop of history, that’s even better.

Her day job involves sharing a building with an eclectic collection of ghosts, which can often prove rather interesting.

For more information on Kirsty visit: