I'm a great advocate for entering writing competitions, particularly for not yet published writers if there is feedback given on the entries. Even if you don't win, you get something for your efforts. In my own experience, entering big reality writing contests in the States, it's a lot of fun and nail-biting, and you learn a bit about self promotion too. In reality competitions, it's all about getting those votes in! I'm sure making the finals in those contests, even though I did not come anywhere near winning, helped me get noticed and finally got me a publishing contract. Reality contests are not just for unpublished writers though. Jane Cable, whose latest book, Endless Skies, is currently collecting some fabulous reviews, joins me today to talk about her experience of entering a reality contest that was being run in connection with the popular TV series, Escape to the Chateau.

Over to you, Jane

It was one of those moments during lockdown; you see something, you act on it, then almost forget about it. A random spark of excitement in a world dominated by daily walks and, for me, churning out words towards a new book.

That random something was entering the Escape to the Chateau novel competition. The opportunity was posted in one of the Facebook groups I belong to, I had a suitable manuscript languishing so within minutes I had uploaded it, waving it on its merry way.

So imagine my astonishment when, months later, I received an email saying The Magic of Trevellas had been short-listed. And it was absolutely genuine surprise too. Rather belatedly I had to check it didn’t cut across any contractual relationships with my publisher, but all was well and I embarked on the popularity contest that is a public vote.

I pulled out just about every stop I could and must have added at least a hundred people to the Escape to the Chateau account list. But hundreds were not enough; people voted in their thousands and my book was not the lucky winner.

But these big national competitions are great for profile – even if you don’t win. They put your name in front of a wider public and they give you something to post about on social media. Something different to say. And if the book does ever see the light of day, it has the name of the competition behind it.

This was undoubtedly a huge advantage for my debut novel, The Cheesemaker’s House. Way back in 2011 it reached the last four in the Alan Titchmarsh Show’s People’s Novelist competition and having that on the blurb – and a quote from one of the high profile judges on the cover – made all the difference in getting an indie book noticed in a crowded world.

It also gave me the confidence to pursue my dream. My writing had been noticed by the editorial team at Harper Collins; I’d won praise from the likes of Cathy Kelly and Jeffery Archer – and received sound advice from Sophie Hannah. I’d been on television twice and made my mother extremely proud.

So what for The Magic of Trevellas now? At the time I was short-listed my publisher was actually considering it, and although I withdrew it temporarily I might ask them to look at it again. But in the meantime they are already thinking about a series of books born out of my next title to be published, and in truth I think I would rather write those. But the Trevellas book is also the first of a series and it features a protagonist I am rather in love with, and have been flirting with for years. So perhaps, when other deadlines allow, I will write book two and see where that takes me. You never know, I might stumble across another competition by then.

Thank you, Jane, for sharing the experience with us. I'm sure I'm not alone in hoping that The Magic of Trevallas will be published one day. As I've mentioned, Jane's latest book, Endless Skies which is set in Lincolnshire not Cornwall and has deep roots, going back to World War Two, is out now. Jane's biography and the description of the book are below. 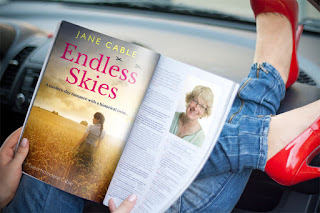 Jane Cable writes romance with a twist of mystery and a nod over the shoulder to the past, and is currently published by Sapere Books. Although born in Cardiff (and thus the connection with Evonne) she now lives in Cornwall. Find out more about Jane at www.janecable.com or follow her on Twitter @JaneCable.

Her latest release, Endless Skies, is a contemporary romance with its roots firmly in World War Two:

After yet another disastrous love affair Rachel has been forced to leave her long-term position for a temporary role as an Archaeology Lecturer at Lincoln University. Rachel has sworn off men and is determined to spend her time away sorting her life out. But when one of her students begins flirting with her, it seems she could be about to make the same mistakes again...

She distracts herself by taking on some freelance work for local property developer, Jonathan Daubney. He introduces her to an old Second World War RAF base. And from her very first visit something about it gives Rachel chills…

As Rachel makes new friends and delves into local history, she is also forced to confront her own troubled past. Could a wartime love story have any bearing on her own situation? Could this time be different?