Reading in the Sunshine - even in November - chatting to Chris Penhall

If you're not quite ready to start on the Christmas books yet, you can still read about sunshine and colourful settings in winter, although sadly this is not in the UK! Today I'm  joined by Chris Penhall to talk about her two books set in Portugal - and the inspiration she took from visits she made there in November and February.

Welcome Chris - good to have you here.

Thanks for inviting me for a chat on your blog.

We both like to write books with a real sense of place, and I’ve had a think about why I enjoy using the landscape around the characters to help tell their story. 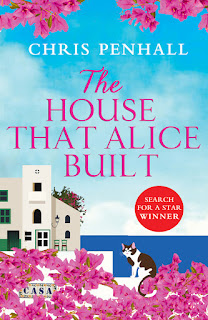 When I started to write my first novel, The House That Alice Built, which is set in Cascais near Lisbon, I remembered how I felt when we first arrived there one February, during Carnival week many years ago. We had come from a rather wet and cold UK to this vibrant, gorgeous place, full of brightness and colour and children wearing fancy dress everywhere  -  it was as if a light had been switched on. That feeling is what I wanted to convey in the book, so writing about how it felt and what it looked like seemed like  the most natural way to help tell Alice’s story.

I continued that in the sequel, New Beginnings at the Little House in the Sun, and my senses were woken up again with a long weekend break in Lisbon, which reminded me of how stunning the city is, with the narrow hilly streets, colourful trams and pink, blue, yellow and white buildings. And as far walking along the River Tejo at night as the sun set in the west…well, that is a memory to truly treasure.

When I write about Alice sitting in the square in Cascais, I put myself there in my mind and describe what’s around me, as I do when she stands on a beach south of the river and tries to capture the colour of the sea so she can use it to design her jewellery. 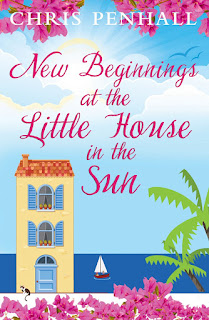 I wrote a scene between Alice and Luis in New Beginnings at the Little House in the Sun which took place in a fictional building in Lisbon. It was based on a visit I made to Casa De Alentejo last year on a very rainy November day. The entrance is fairly ordinary, but as you walk up the stairs it opens up to a beautifully tiled room - and I do love a tile! On that particular evening I heard haunting music drifting down from the floor above, and I followed it, to discover a chandeliered room full of people dancing to what sounded like fado. It was entrancing and I felt like I was in a film. So, of course, I used it in the novel.

I read many books and am inspired by a range of different authors, but I also love the cinema too. So, when I wrote my two novels, I think subconsciously I was conjuring up the locations as if they were in a film. Tim Burton’s 2010 version of Alice in Wonderland was virtually dripping with colour, as was the 2016 musical La La Land. Both are favourites of mine and had quite an impact on me. Do you remember the beautiful scene in the Planetarium or Emma Stone’s iconic yellow dress? But if I go right back to childhood, I have to say that Mary Poppins may well be to blame for my adoration of stunning palettes on screen. I don’t think I have ever lost the sense of wonder I felt as a little girl sitting in a cinema watching that story come to life in front of me.

There’s plenty of sunshine and heat and colour in The House That Alice Built and New Beginnings at the Little House in the Sun. My next novel is set in the UK, but although some rain will fall, there won’t be much…

Thanks Chris. It's lovely to have some background for scenes from the books. Looking forward now too to the next one. That's one of the great things about being an author, you can make your own weather!

The House That Alice Built

Home is where the heart is …

Alice Dorothy Matthews is sensible. Whilst her best friend Kathy is living it up in Portugal and her insufferable ex Adam is travelling the world, Alice is working hard to pay for the beloved London house she has put her heart and soul into renovating.
But then a postcard from Buenos Aires turns Alice’s life upside down. One very unsensible decision later and she is in Cascais, Portugal, and so begins her lesson in ‘going with the flow’; a lesson that sees her cat-sitting, paddle boarding, dancing on top of bars and rediscovering her artistic talents.
But perhaps the most important part of the lesson for Alice is that you don’t always need a house to be at home.

Available in e-book and audio on all major platforms HERE

New Beginnings at the Little House in the Sun is the sequel to The House That Alice Built, the Choc-Lit Search for a Star-winning novel from 2019

Follow your yellow brick road ....
Alice Dorothy Matthews is on the road to paradise! She’s sold her house in London, got rid of her nasty ex and arranged her move to Portugal where friendship and romance awaits. All that’s left to do is find a place to call home.
But Alice’s dreams are called into question when complications with friends, work and new relationships make her Portuguese paradise feel far too much like reality.
Will Alice’s dream of a new home in the sun come true?

Available in e-book and audio on all major platforms HERE 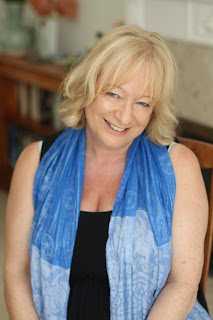 Chris Penhall is the winner of the Choc-Lit Search for a Star competition, sponsored by Your Cat Magazine, with her debut novel, The House That Alice Built, published in 2019. The sequel, New Beginnings at the Little House in the Sun was published in August 2020.

Chris is an author and freelance radio producer for BBC Local Radio.

Born in South Wales, she has also lived in London and in Portugal, which is where both novels are set.. It was whilst living in Cascais near Lisbon that she began to dabble in writing fiction, but it was many years later that she was confident enough to start writing her first novel, and many years after that she finally finished it! She has just published her second book and is now working on her third.

A lover of books, music and cats, she is also an enthusiastic salsa dancer, a keen cook, and loves to travel. She is never happier than when she is gazing at the sea.

Email ThisBlogThis!Share to TwitterShare to FacebookShare to Pinterest
Labels: choc-lit, Chris Penhall, New Beginnings at the Little House in the Sun, Portugal, The House that Alice Built